Whiskey Sour consists of whiskey, lemon juice, sugar syrup and optionally protein. A good Whiskey Sour has the perfect balance of sweetness, acidity and the aroma of cask aged whiskies. The traditional Whiskey Cocktail has been popular for centuries and is served in the best bars in the world.

Recipe for the Original Whisky Sour

The preparation of a Whisky Sour Cocktail on video

How do I make sugar syrup myself?

Whisky Sour without sugar syrup? That does not have to be! I will show you how to make sugar syrup very simply. A basic distinction is made between:

Making sugar syrup yourself is easy. You simply dissolve a certain amount of sugar in water - and the syrup is ready.

For those who like to experiment: Different types of sugar

Apart from the white sugar commonly used in households, there are of course other types of sugar that differ in taste, appearance and price. In this table you will find an overview of all the information about the different types of sugar:

What can I use instead of a cocktail shaker?

If you don't have a cocktail shaker at home, that's no problem. You can still mix your whisky cocktail using alternatives. All you need is a clean, sealable container with a sufficiently large capacity and a sufficiently large opening. For example, washed-out preserving jars or jam jars, or even fresh-keeping boxes are suitable for this.

Which whisky is suitable for Whisky Sour?

A good Whisky Sour lives from the perfect balance of sweetness, acidity and the aroma of good whisky. The quality of the ingredients plays a central role. Tastes vary, but a bad whisky can be recognized quite quickly. If the whisky tastes sharp, smells like bad vanilla and reminds you of solvents, you should not even try to mix a good Whisky Sour cocktail with it. Most of the cheapest whiskies from discounters are not suitable for this. But it does not have to be the most expensive drop. For about 20-30€ a bottle you can often get good quality whiskies, with which you can get good results. Basically, many whisky types are suitable for Whisky Sour, but the American original is most often prepared with Bourbon.

Bourbon is made from a mash that must consist of at least 51% corn. The remaining 49% can consist of different types of grain. Usually this is barley, rye or corn.

How do I recognize a good Bourbon?

A good Bourbon Whisky is comparatively mild on the palate, soft on the finish and has fine flavours of vanilla, oak, fruit, spices and honey. The taste should be complex but not artificially enhanced.

Here are some examples of whiskies in the lower price range:

Whisky Sour without egg white or with egg white?

Some who hear about a cocktail with raw protein for the first time are sceptical at first. You can't blame them, because salmonella can actually multiply in raw eggs and can lead to a salmonella infection when consumed. Therefore, it is very important: Only use eggs that are as fresh as possible and stored in a cool place! Then the least can happen. If you still have concerns, you should prepare the Whisky Sour with the recipe without protein. Personally, I have never had any problems with salmonella from the many Whisky Sours I have drunk so far.

If you use super fresh eggs, the egg white will give you a rounder taste and combines the flavours of the other ingredients nicely. In addition, shaking with egg white gives a nice head of foam, which enhances the cocktail visually. I personally like the Whisky Sour with egg white best.

How do I mix a Whisky Sour vegan?

In the water there are similar proteins as in the egg white, which binds the cocktail and creates a beautiful foam crown.

If you don't want to use canned chickpea water, you can also buy bottled Aquafaba. Fee Foam you can get for example in this shop.

As an alternative to fresh eggs, egg white powder is also suitable. This has a longer shelf life and can be easily mixed with water if required. One teaspoon corresponds to about half an egg white. When mixing, it is best to put the powder in the shaker last so that it mixes well with the other ingredients.

Which glass do I use to serve the Whisky Sour?

Whisky Sour is most often served in a tumbler glass or in a beautifully decorated Old Fashioned glass. Very high quality are glasses made of lead crystal or cut lead glass. However, classic cocktail glasses with a long sems are also suitable.

You can find a selection of different glasses on the net at important shops.

How do I decorate a Whisky Sour?

To garnish your cocktail like a good bartender, you can cut orange slices and stick them on the edge of the glass or put a cocktail cherry (also called Maraschino cherry) on top of the whitecap. For an extra flavour and a nice look you can also put one or two splashes of Angostura Bitter on the head.

How many Whisky Sours can I drink?

Prof. Dr. Helmut Seitz and Prof. Dr. Gerhard Bühringer from the German Head Office for Addiction Issues make recommendations regarding the limits for the consumption of alcoholic beverages:

"Every person has an individually different risk for alcohol-related disorders, due to the interaction of their genetic make-up and their learning experiences. (…). The following values apply to healthy people without genetic or acquired health problems: The low-risk threshold dose in dealing with alcohol in healthy people without additional genetic or acquired risk is man at 24g alcohol per day and in women at 12g alcohol per day. (…). At this alcohol dose, at least 2 alcohol-free days per week should be observed.

What is the difference between Whisky Sour and Whiskey Sour?

When people in Europe talk about whisky, they often mean Scotch whisky. And it is written like this: whisky.

But of course there are exceptions here too. The American whiskey producer Maker's Mark uses the spelling without an e, although this is straight bourbon whiskey.

In the end it doesn't matter how you write it. What is meant, of course, is one thing: The tastiest cocktail with whisk(e)y on this earth!

On the following diagram you can see which of the two terms in Germany has been searched more frequently on Google in the last twelve months. 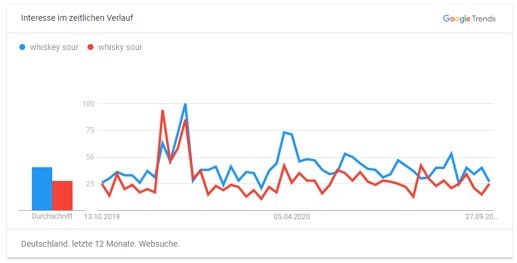 Where can I buy the ingredients for Whisky Sour?

You can get most of the ingredients in the supermarket of your choice. Make sure to buy organic lemons and eggs. You can either buy sugar syrup as ready-made bar syrup or, even better, make it yourself with sugar and water. Ice cubes are available as crushed ice or as whole ice cubes (usually hollow cone ice cubes). Best here are whole ice cubes that are not hollow.

Good Straight Bourbon Whisky is more difficult to find in the supermarket. Whisky's that you often find there are for example Maker's Mark, Four Roses or Knob Creek.

The history of Whisky Sours

The cocktail variant "Sour" was mentioned in writing in 1862 in the book "Bar Tender's Guide by Jerry Thomas.

The idea of mixing lemon, sugar and spirits was born much earlier, on board the many ships that were trading at that time. On these ships there was often a shortage of water and the sailors suffered from the dangerous disease scurvy due to vitamin C deficiency. Lemons and spirits could be kept even at sea and the vitamin C in the lemon prevented the spread of scurvy. Whenever the sailors went ashore, this recipe spread and sours with rum or brandy became the standard of any bar that was worth its salt.

The Whisky Sour was first mentioned in January 1870 in the US American daily newspaper "The Waukesha Plaindealer".

The popularity of Whisky Sour continued to grow and it quickly became a classic that no bar could do without. 1879 the great American daily newspaper "The Atlanta Daily Constitution" wrote: "When American meets American, then comes the Whiskey Sour“.

How many kcal does a Whisky Sour have? You can find out here. One serving (225g) contains:

Source of the data is the U.S. DEPARTMENT OF AGRICULTURE

The 5 most common mistakes in Whisky Sour Cocktail

Does your Whiskey Sour taste too sour or too sweet? Or do you have the feeling your drink tastes closed and can't develop properly? This may be because the balance between acidity, sweetness and strength is not quite right. To avoid this common mistake, there is a simple but promising strategy: The 3-2-1 rule. It is used in many cocktails, especially the sours. These include Pisco Sour, Margarita, Sidecar.

This rule works best when:

If your ingredients deviate from this and taste, for example, significantly stronger, sourer or sweeter, you should adjust the ratio accordingly.

The cocktail not shaken strongly enough

To make a nice head of foam when straining and to combine the ingredients and their flavours well, you need to shake your cocktail really well. The first shake, the dry shake, is the most important step for a good head of foam. Shake really hard for at least 12 seconds to foam the egg whites. In the wet shake, all the ingredients combine and are cooled down. You should also shake vigorously, but not as vigorously as the first shake.

Protein in Whisky Sour: too little, too much, too old

The errors described so far can be avoided relatively easily if you have bought the right ingredients. However, if your ingredients are bad, even the 3-2-1 rule or shaking vigorously won't help. You should pay attention to this when buying the ingredients:

The wrong ambience for the fine Bourbon drink

A cocktail like the Whiskey Sour is not a drink for the plastic cup. Take your time with this drink and celebrate every step, from preparation to the last sip. Get a nice cocktail glass, such as an Old Fashioned glass or a tumbler glass, and garnish your drink so that it is pleasing to the eye. Put some music on top of it and drink it together with good friends or people you like.If you combine the above steps with the right ambience, then you can enjoy the perfect Whiskey Sour!

The traditional Whisky Sour Mix is made with Bourbon, but other whisky types are also perfect for our favourite whisky cocktail! Here I present some recipe ideas: